Today there are enough (even more than enough) goods and services available so that in principle everyone’s needs can be met. However, the question is how to do this in practice? Dr. Christopher Houghton Budd shows how – based on a triple rethinking of pension funds, wages and the retirement age – this could be done without the help of a state based unconditional basic income. 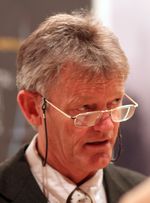 Dr. Christopher Houghton Budd, Economic and Monetary Historian and Director of the Center for Associative Economics.

In any civilised society, one could expect its citizens to ensure that none among them should be wanting for the basic things in life. In most of today’s societies, with their substantial military expenditures and huge inefficiencies consequent on state-run economics, coupled to the fact that on-going individuation engenders ever greater amounts of wealth, it cannot be a question of lack of money but of redirecting money.

This question has two parts. Firstly, do we see clearly how, skewed distribution notwithstanding, the overriding characteristic of modern economic life is more than adequate wealth levels? Secondly, do we have the generosity or even the self-interest to ensure that a portion of today’s wealth is allocated to ensuring a basic income level for all? These are connected themes – the will for the latter would enable us to see the former. And vice versa. That is to say, we need to ‘walk our talk’ by enacting through concrete arrangements what is evident to us in thought.

The problem is not an economic one. A basic income is simply the monetary counterpart to basic needs. That is why, for example, monetary policy is a matter of ensuring the cover of money is the total of available goods and services, or, conversely, that there is enough money to buy the available goods and services. Just so, basic income, expressed as a policy, is a matter of ensuring that humanity as a whole has an income sufficient to match its basic expenditure. This would amount to a subset for an enlightened monetary policy, meaning a monetary policy based on matching money flows to the twin recognition that income = needs and investment = capacities.[1] From this would follow the disentanglement of money and credit, an idea that has its origin in the monetary theory of of the Austrian philosopher and economist Rudolf Steiner.

Indeed, perhaps more than any other thing, it is this linkage that shackles us to pre-globalised economic conditions. At the technical level, the link is both epistemological and structural. That is, to say, we both think and act as if there were no difference between money and credit. Yet it is by this conflation of two distinct categories that we remain bound to our brains (thinking inside the box) as regards our economics, when we should be thinking “with that which flies away from the earth,” to use an evocative image from Steiner.

Finding the will to facilitate basic income entails two problems. One concerns our worldview, the other practicalities. There will be no will towards such a project as long as we believe, or our economic policies imply, that the devil should take the hindmost, that some people deserve to be poor or to starve, or that survival of the fittest and other quasi-racist notions should be our guiding lights. For it is thoughts such as these that urge us to ignore the circumstances of our fellow human beings. We are also incited to such egoism, of course, by the constant iteration of an ‘invisible; hand’, ever-lower prices, and relentless competition as the watchwords of a supposedly scientific approach to economic life. How one steps free of these concepts is a debatable point, but step free of them we must in order ourselves to be the wellspring of welfare.

The second problem is practical: How are we to arrange a basic income? The choices are three:

The forum for such discussions should be within an enterprise. The role of the state here is to provide the rights context for such arrangements to take place. In fact, if individuals together accorded themselves their remuneration and together ensured that their joint enterprise commanded the necessary income (because of its value as perceived by its customers), then the need for externally provided rights that ensure a basic income would be minimised, if not obviated altogether. It must even be allowed for a person to take zero if his circumstances allow him to do so and not to be forced to accept a state-decreed minimum wage.[2]

Moreover, when instituting such arrangements one has to be careful not to let collective agreements between sovereign individuals be taken over or subverted by the state. For then a crucial social relationship becomes politicised when it need only remain a simple economic task of first ensuring that we all have our basic needs met before we allocate to ourselves funds in addition.

By extension, of course, similar considerations concern pension provision and other forms of social security, all of which are versions of the one problem: How do I provide income for myself here and now and income for others there and then? Those others, of course, include myself when I am infirm or old.

The entire social security domain is overarched by this question, which, while it may entail a complex answer, is not complicated to understand. And in fact the answer is also not so difficult to comprehend. Difficulties in comprehension have all to do with how the individual overcomes his self-centredness as regards economic life, and very little to do with practical arrangements or economic possibility.

One can sense this if one looks at the three main aspects of social security – the concept of employment, the notion of retirement, and the choice between current cash transfers, whereby the currently employed pay today for the currently unemployed, and invested fund arrangements, based on each of us ignoring the needs of others and providing for ourselves by lending money over time and thereby earning entitlements in the future. The modern concept of employment is a real devil-in-the-detail. If we were all remunerated for the results of our activity and not paid for our labour, the concept of employment would not arise, as it does not for a self-employed person for whom the question is only ever, “How long can I usefully make my contribution to society and be remunerated for that?”

Linked to this is a second devil-in-the-detail – the idea that a particular age should be the moment of retirement. What economic and human nonsense! By imposing this from without, as a right regardless of how it is provided for, we create a rod for our own backs. We see this when we think to solve the pensions crisis by the simple expedient of moving the retirement age upwards. The problem is an externally determined age. If people were not employed, but understood they were being remunerated for their contribution to society, they would not think in terms of an average cut-off point. Averages are real enough as statistics, but quite unreal as policy drivers. Of course, one can calculate the total number of people in a given number of towns, then divide it by the number of towns to get the average population-count. But should one really then decree that every town should have the same number of people? Averages simply engender false economics.

Left to themselves, human beings would retire at different ages and for all manner of reasons – none of them being that one has reached a statutory retirement age. The swings and roundabouts of life would ensure that myriad seemingly separate decisions matched out, so to speak, for the simple reason that income and expenditure are two sides of one coin, two sides of one transaction. The same is true, of course, for savings and investment. Moreover, retirement means ‘withdrawal of labour’; but at that stage of life it should, mean ‘release of wisdom’. The economic difference between the two is real and vast.

Lastly, the key social security question is one of how. How is money to be transferred from ‘me’ to ‘the others’? The clearest answer is to ensure that ‘my income’ today includes enough for ‘the others’ and that this amount is transferred into an account for the purpose. The calculation and the transaction should be immediate, not across time.

This is a controversial suggestion and lays an axe to the concept of providing for pensions by way of funds. This suggestion is often met with disbelief because most people have now become reliant on such a technique and do not notice that by its very nature it creates a stock of capital that should not be there and which then has to be maintained by preferring capital over labour, shareholder value over employee income.

To propose currently-financed pension arrangements flies in the face of many habits and will be met with the criticism that, because they mean higher incomes and lower shareholder gains, they entail a reduction in the return to capital. This may or may not prove the case, bearing in mind that the process of investing over time for a future income itself requires an inflated return to capital; one, moreover, that brings with it enormous uncertainty and the risk of inter-generational inequities.

The key macro-social question in regard to social security is this: Would the triple rethink outlined here (remuneration for one’s contribution to society instead of ‘employment’, abandonment of a statutory retirement age, and the creation of immediate funding arrangements) engender the will to overcome self-centeredness?

If not, the likelihood, almost beyond contestation, is that social security arrangements will everywhere become privatised and individualised, that the retirement age will rise (therefore eating into the time available between stopping work and dying to such an extent that the conventional expectations and idea of retirement loses their meaning), and that pension funds will become ever more dependent on the capitalisation of real estate.

All this is indeed possible, but it will only put off until tomorrow the day of economic reckoning. When that day comes, people will realise that it may have been better spending their lives doing what their destiny asked of them rather than working for a living. Better to have done one’s whole life long what one had a love to do and been remunerated for it, than reserve this for weekends and retirement. For it is never the labour a person does that means anything economically, nor does this bring dignity to life. In both cases, it is the recognition and funding by others of one’s unique contribution to society that moves economic life forward while at the same time dignifying human existence.

[1] Admittedly, most people link investment to real estate, the stock market or whatever else they have invested money in. But these are the collaterals. In reality, the investments are in individuals because of the capacities they have – or purport to have! – on which the fruitfulness of any investment depends.

[2] We should also, of course, let go the divisive language of wages and salaries, both of which are readily covered by ‘remuneration’.